Crawford County is situated in the west-central portion of the State of Iowa. The county is located in the Southern Iowa Drift Plain which is characterized by a ridged landscape capped by loess deposits. Crawford County is on the west side of the Mississippi-Missouri Divide and all water flows toward the Missouri River. The 42nd parallel of N. Lat. runs nearly through the center of the county. 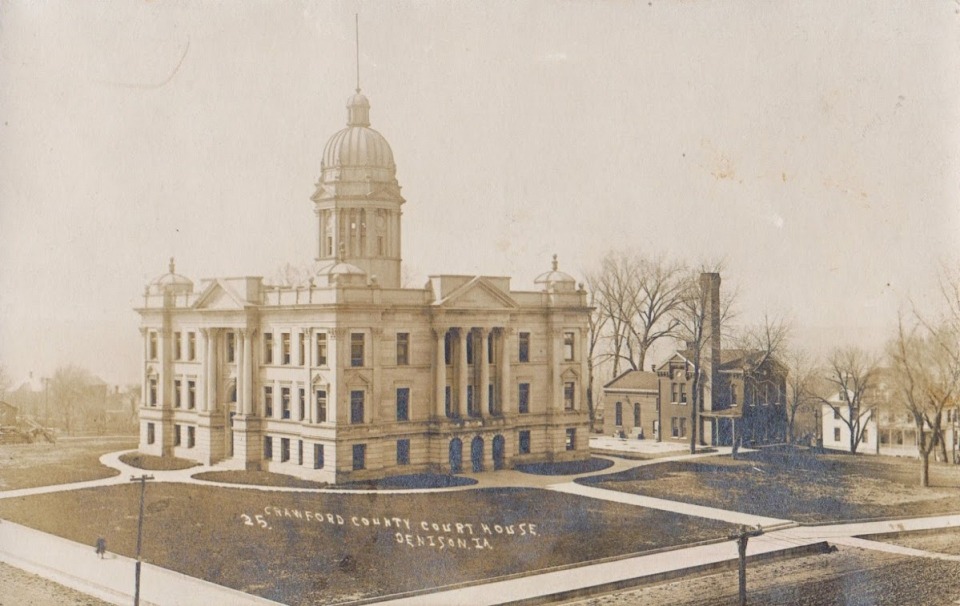 Crawford was settled in May of 1849 by Cornelius Dunham, of Jackson County, Iowa. He brought Franklin Prentice and his wife and settled at the place known as Dunham's Grove on East Boyer River, about six miles east of the present town of Denison. Mr. Prentice built a cabin for Dunham, it was a log house, the door being made of one slab hewn from a large black walnut tree. This was the first settlement in Crawford County. The same year, Prentice took a claim at the mouth of Otter Creek, on Boyer River, near Mason's Grove.

On January 15, 1851 the most comprehensive law of county organizations was passed. This created 50 new counties, including Crawford. Many of the names have changed and the boundaries of some of these counties have been modified, such as Crawford, which was originally made up of 16 townships. Crawford inherited Soldier, Charter Oak, Willow and Boyer in October of 1865 from Monona County. For the most part, the counties were named after statesmen who had played important parts in the early history of the country. Thus, it was that Crawford County was named in honor of William Harris Crawford of Georgia.

The first births in the county were David and George Jesse Mason, twin sons of Jesse and Eliza Ann Mason, born in 1852. The first marriage ceremonies took place at Mason's Grove, October 12th, 1853, at which time and place Rev. Thomas Dobson united in marriage George J. Johnson and Elizabeth Ann Mason, Noah V. Johnson and Jane Mason, Calvin Borr and Elizabeth Mowery. The first death was that of John A. Dunham, in the winter of 1854-5. The first entry of Government land was made August 21st, 1854, by John Gilbreath. The first tax levied in the county was for the year 1855.

From the first settlement, until April 1855, Crawford County was attached to Shelby County for judicial purposes. At the April election, 1855, Crawford County was separately organized by electing a full corps of officers: for Judge, E. W. Fowler; for Clerk of the District Court, Thomas Dobson; for Sheriff, D. J. Fowler; for Recorder and Treasurer, A. R. Hunt; for Prosecuting Attorney, Cyrus Whitmore; for Surveyor, Samuel Kennedy; for Coroner, L. Skinner: for Drainage Commissioner, John R. Bassett, for School Fund Commissioner: Isaac B. Goodrich. At the time there was but one election precinct in the county, all the votes being cast at Coon Grove, in what is now Denison Township.

New county officers were chosen at the following August election, at which time John R. Bassett was elected County Judge. Judge Bassett transacted his first official business September 3rd, 1855, on which date he acted upon a petition for a county road, refusing to grant the petition for reasons set forth in the records as follows:

"I set the road petition aside on these grounds: In the first place, I cannot find out that there were notices as the law prescribes in three public places in the county. Secondly, the notices not agreeing with the petition. Thirdly, and the greatest objection, is that there was no one offered to enter bonds for the security of the payment of the Commissioner, providing the road was not finally located. For these objections I hereby set the road aside and pronounce not in accordance with law."

On the 3rd of December of 1855, the Judge, Clerk and Recorder met and reported their accounts of moneys received from August 1st to December 1st, the Judge having received $5.75; Clerk, $3.00; Recorder, $8.70. Total, $17.45. They made an equal division of the amount and appropriated it toward the payment of their salaries. William L. Henderson, having been appointed surveyor and agent to select the swamp lands, made his report December 5th, 1855, and was allowed $150 for his services.

The first estate administered upon was that of Cyrus B. Whitmore, John Vore being appointed administrator. The location of county roads constituted a large proportion of the business of the County Judge. Judge Bassett continued to serve in this capacity up to the organization of the Supervisor system.

The first State Road in the county was surveyed in the fall of 1855 by William L. Henderson. The first County Road in September 1856 by Morris McHenry.

Hon. J. W. Denison came to the county in the Fall of 1855, and during that year and the next, selected a quantity of land for the Providence Western Land Company, and in September, 1856, commenced the settlement of the town of Denison. He brought with him Francis Reynolds and John B. Swain, who erected a steam saw and grist mill in the new town. Denison, is the county seat and is situated near the center of the county, in the forks of the Boyer River.

Fort Purdy was really not a fort as we think of the term today. Instead, it was a four-room house that was built by John Purdy in 1856. As far as the historians can tell Fort Purdy was located on Broadway Street near Courthouse Square in Denison and identifies as a neighborhood in Denison. Fort Purdy was located near Ridge Road in the general location of the New Life Christian Fellowship Church. With the population of Crawford County growing steadily in the 1850s, there were as yet no banks in the county. John Purdy was paid $1.75 for storing the county books and records at his home. The home was built on a high piece of ground from which Mr. Purdy could see both Boyer Valleys and be alerted to any Indian attacks. Other settlers, even those as far away as, Mason's Grove, recognized this place as well located for defense and by the people’s agreement they joined there for protection, should it become necessary. Indian scares were prevalent in the 1850s and the residents in the area were fearful of any encounters with the native Indians.

The construction of the Courthouse in Denison was finished in the Fall of 1858. It was built of brick, was 30 X 40 feet, and two stories high. It stood in the middle of the public square, a beautiful rolling tract of ground, and was set with handsome shade trees and enclosed in a neat and substantial fence.

The first newspaper was established October 1, 1860, by J. W. Denison. It was a twenty-eight column sheet, Republican in politics, and continued about a year and a half.

Please contact Amy Pieper at the Crawford County Auditor's Office at (712) 263-3045 for more information about the Historic Preservation Society.